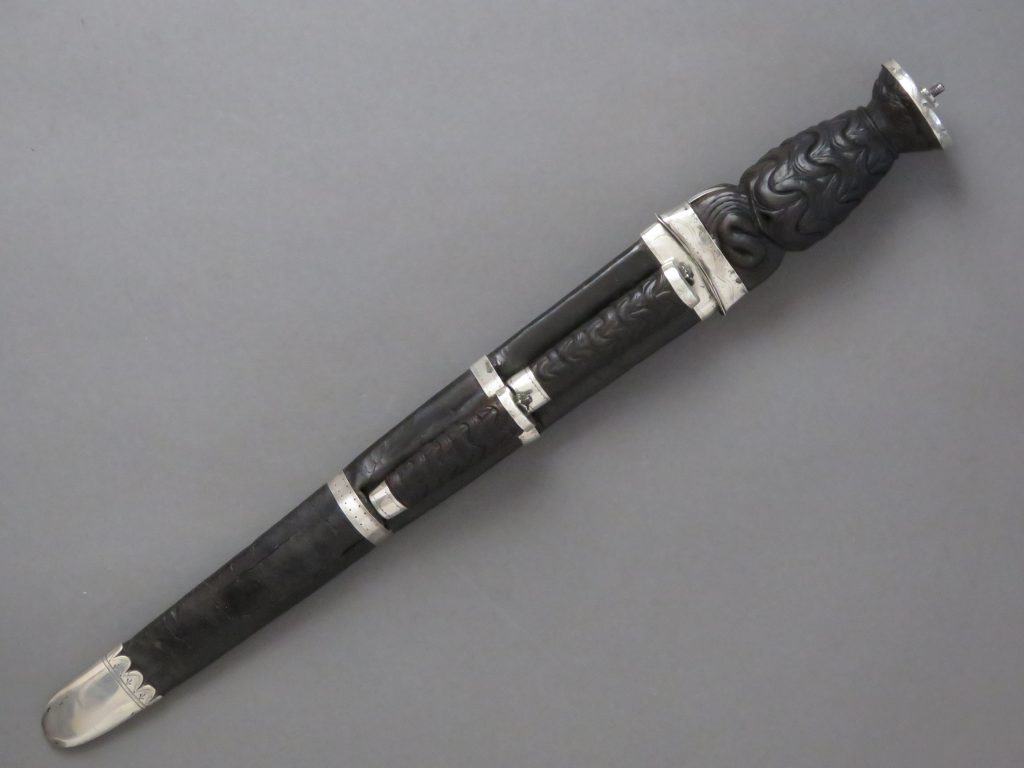 This attractive silver mounted dirk was most likely commissioned for a Scottish officer in the late 18th century at the beginning of the Napoleonic Wars period. It retains some features present on traditional Highland dirks from earlier times plus embellishments which reflect the changing fashions of the later 18th century. These newer features are apparent, but not uniform, across the range of contemporary dirks and predate the individual regimental styles for dirks which appeared later on in the 19th century. The pommel rim is punched with the maker’s mark “J E” in raised relief inside an oblong panel and are almost certainly for James Erskine of Aberdeen who was working from 1792 to 1818.

The dirk retains its scabbard, bi-knife and fork. The grips are of dark hardwood, probably bog oak, carved with reeded bands of Celtic interlace. The dirk has a baluster shaped middle to the grip decorated with six bands of interlace. The space between the haunches is carved with scrolls and the pommel is shaped with scallops enhanced with border lines.

The silver mounts of the dirk consist of a flat pommel cap with its edge folded over to form a protective band around the pommel rim. This band is punched with the maker’s mark and decorated with an incised wavy line of dog tooth design all around the circumference. The cap is centered with a square shaped nut with shaped edges which secures the screw threaded tang end which holds together the parts of the dirk. This is surrounded by an incised circle which has six triangles pointing outwards from its rim as a pentagonal star in the same dog tooth  design.  Each triangle has an outwardly pointing arrow inside. A silver ferrule is mounted at the bottom of the grip with a flared base decorated with a dog tooth band at each edge, with a dotted line alongside each, and a wavy band same as that on the pommel in the middle. The base of this ferrule is concave with a turned edge fits securely onto the upper convex shape of the scabbard mouthpiece. Two silver bands protect the haunches and are decorated in the same manner. On a smaller scale the pommel caps to the bi-knife and fork are formed in a similar fashion with square shaped nuts which secure the tangs and dog tooth patterns of waves around the rims. The ferrules at the bases also display dog tooth lines and rows of dots now more worn than the others.

The black leather scabbard is stitched at the back and mounted with a silver mouthpiece for the dirk and another each for the bi-knife and fork plus a chape. The mouthpieces are decorated with dog tooth lines at the edge and lines of dots to the inside. The chape has a rounded tip and a scalloped edge enhanced around the insides of the curves with dog tooth crescents. The base of the scallops is decorated with parallel lines which extend around the circumference of the chape decorated with a dog tooth line between. Each scallop has an outward pointing arrow in each similar to the arrows incised into the triangles on the pommel cap. The mouthpiece has a circular suspension mount at the back.

The thick, robust, single edged dirk blade has a scalloped back edge for two thirds of its length after which it becomes double-edged. A deep fuller is incised underneath for the same length. A shallower, broader, central fuller extends along the blade from the grip almost to the blade tip.  The bi-knife blade is leaf-shaped and single-edged for its whole length and has the blade maker’s mark “A C” stamped on one side near the hilt.

The decoration on the dirk is similar to that which appears on contemporary silverware produced by silversmiths all over Scotland at the time. Similar decoration is also present on different but related and contemporary styles of military dirk (for an example see James D Forman, “The Scottish Dirk”, Museum Restoration Service, 1991, page 14, fig 19, for a dirk made by D McIntyre & Sons, Kenmore, Perthshire). The star shape incised into the pommel top is a common contemporary theme. All of these dirks are mounted with heavy blades of a functional type for military rather than civilian attire.

Dirks were not part of normal provisioning by the British Army. During the third quarter of the 18th century enlisted men and officers kitted themselves with dirks. This  traditional practice dwindled towards the end of the century and dirks become an item of furniture mainly for officers who acquired dirks of regionally influenced styles and design. The dirk described here has a certain uniqueness to its profile probably influenced by tastes in Aberdeen at the time. The overall length of the dirk outside its scabbard is just over 18 inches (46 cm) and the blade 13.25 inches (just over 33 cm).