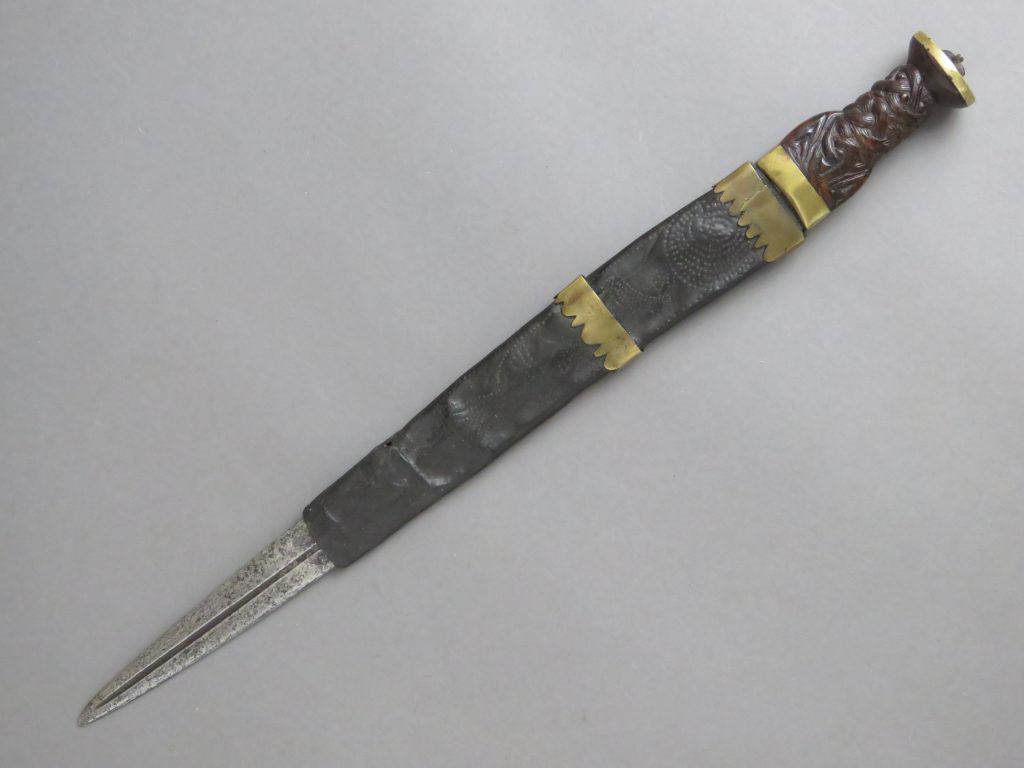 A fine Highland Scottish dirk dating to the period between the 1715 and 1745 Jacobite Rebellions. This is an attractive example of a locally made traditional  weapon. This craft industry in the Highlands all but ceased with the stringent enforcement of the Disarming Acts that followed the failed 1745 Rising and the prohibition of weapons in the Highlands for all but members of the military. Dirk making continued in the Lowland towns for the army, and later became more broad-based taking in the civilian market later in the century as restrictions eased. By then the Scottish dirk was more or less a Highland dress accoutrement rather than a weapon .

Little survives of Highland Gaelic craft and art from before the 1745 Rebellion. This art was largely expressed as patterns of Celtic scrolls, interlace, roundels, beasts and mythical figures, applied to targe fronts, powder horns, sporrans, dirk grips, plaid brooches and scabbards. The dirk discussed here has a fine grip cut from bog oak carved with patterns of reeded interlace and Celtic rope work. This consists of two bands of interlace to the middle of the grip interspersed at the joins with integral studs in the upper band, and panels of reeded triquetras between the haunches. The basis of this pattern has continued in modified form to the present day in dirk hilt design.

The dirk is mounted with a brass pommel cap with a screw threaded cruciform shaped iron nut in the middle which secures the end of the tang. A small length of tang protrudes above the nut in the usual manner of assembly for dirks of this time. Typically, the dirk has a brass crescent shaped ferrule applied to the base of the grip into which the ricasso shoulders of the blade sit securely.

The thick, stiff, single edged blade is formed from a cut down back sword which tapers to its point. A single pronounced fuller is present on each side which commences a short distance from the hilt and extends to the blade tip. It is stamped with the blade smith’s mark “ANDRIA FARARA”, flanked by incised crosses on both sides. It is probably of Solingen manufacture.

The dirk retains its scabbard which has pockets at the front showing that it was once mounted with a bi-knife and fork which are now missing, as is the brass fork mount and the lower part of the scabbard. It retains its brass mouthpiece and bi-knife mount decorated with scallops at the lower edges. The scabbard is stitched at the back and was one suspended by a thong threaded through four holes, two each side of the line of stitching near the top, the middle of which has since been pulled  away. The front has images of a stag, a chalice, a large scroll and possibly bagpipes formed from punched dots.

The grip has a rich, deep, dark patina. The assembly is secure. The brass parts display a dull aged patination. The blade is mottled with a layer of blackened patches in places.