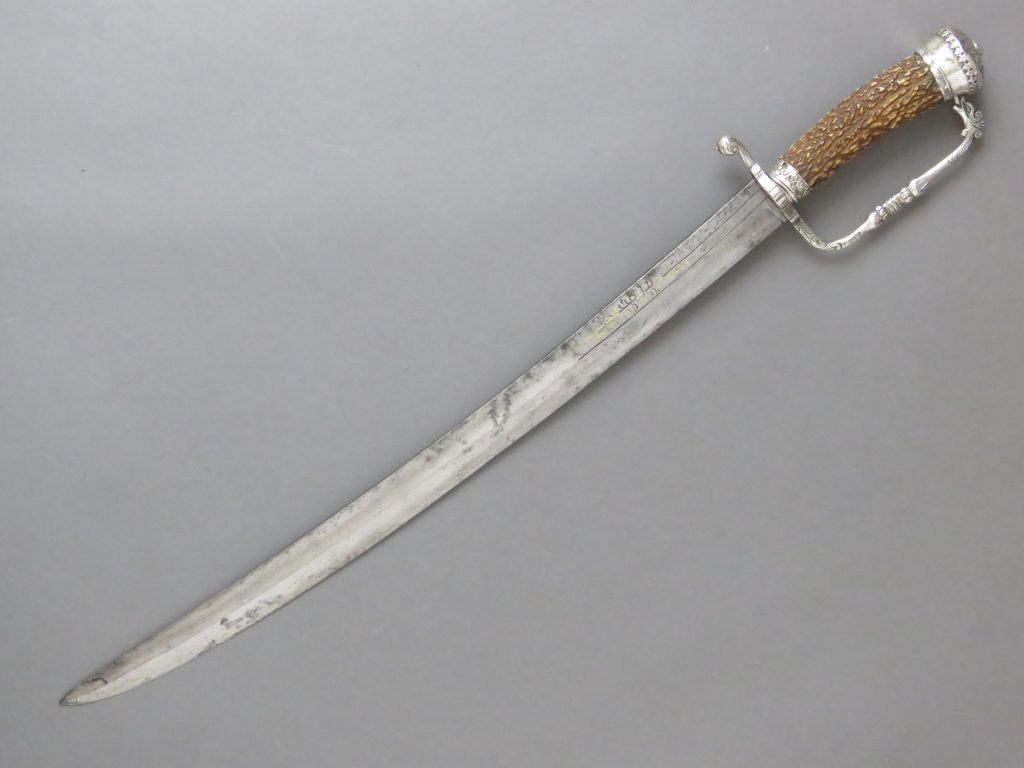 An English silver mounted hanger with hallmarks for the year 1699/1700 by the silver smith and cutler Edward Ravens of London.

The knuckle bow is stamped with Edward Ravens’s Britannia Standard maker’s mark of “RA” in raised relief inside a heater shaped shield. The lion’s head and date stamps lie alongside.

Ravens lived in exciting times as London was remodelled after the turbulence of the Civil War period, plague and the Great Fire of 1666. The city was more outward looking, international trade was growing through London port, military success was being achieved abroad and more interest and investment was being expressed in art and culture. Ravens was one of a group of the leading craftsmen of his day and the quality of his work represents the evolving style and fashions of late 17th and early 18th century Baroque London.

The hilt of this sword is comprised of a bold faceted quillon block with a  downward facing rear quillon swollen and chased with a foliate engraved design. The knuckle bow is chased in its swollen middle with circular ribs with foliate bands above and below. The base of the knuckle bow is engraved with foliate designs and the top rises to a foliate based monster-head terminal hooked into the pommel-cap. The pommel is formed as a broad cap with a circle of downward facing leaves around the rim. A similar ring of leaves surround the pommel button on top. The grip is of stag antler with a ferrule at its base decorated with a ring of leaves around its circumference of similar type to those on the pommel. The base ferrule to the grip is moulded to the contour of the antler.

The curved single edged blade is of high quality and of interesting form. It is 20.5 inches long (52 cm). It has a broad shallow fuller which extends almost from the hilt to the tip. Above this an incised panel which projects from the hilt along the spine of the blade for some 5.5 inches (14 cm). Inside this inlaid in latten amongst foliage on one side is “MEFECIT” and in the same manner on the other side “SOLINGEN” (I was made in Solingen). From the end of the panel another shallow fuller runs to the tip of the blade. A marked central ridge is present where the two fullers meet along the middle line.

Edward Ravens lived from 1672 to 1756 and for most of his life in the parish of St Bride’s, Fleet Street, in the City of London. He was sworn free by servitude in 1695/6 and the mark “ER” recorded in Goldsmith’s Hall may be his from that time. With the advent of the Higher, or “Britannia”, Standard for silver in 1697, smiths were required to record a new punch mark bearing the first two initials of their surnames. As a result, Ravens recorded his mark of “RA” in raised relief with a dot between probably in April 1697. In 1720 as regulations changed he entered his second mark “ER” with a pellet below inside a shield.

For further information on Edward Ravens see Leslie Southwick, “London Silver-Hilted Swords, Their makers, suppliers & allied traders, with directory”,  2001, Royal Armouries, page 205 and Fig: 47 for biography and plate 26 for an example of his work, which is a small sword. This has some features similar to some on the hanger discussed here, which indicate that the same man  made both swords, namely the similar knuckle bow finial at the pommel and the similar ribbed feature midway along the knuckle bow.

The hanger is in good condition. The blade has small losses of latten to the inscription.