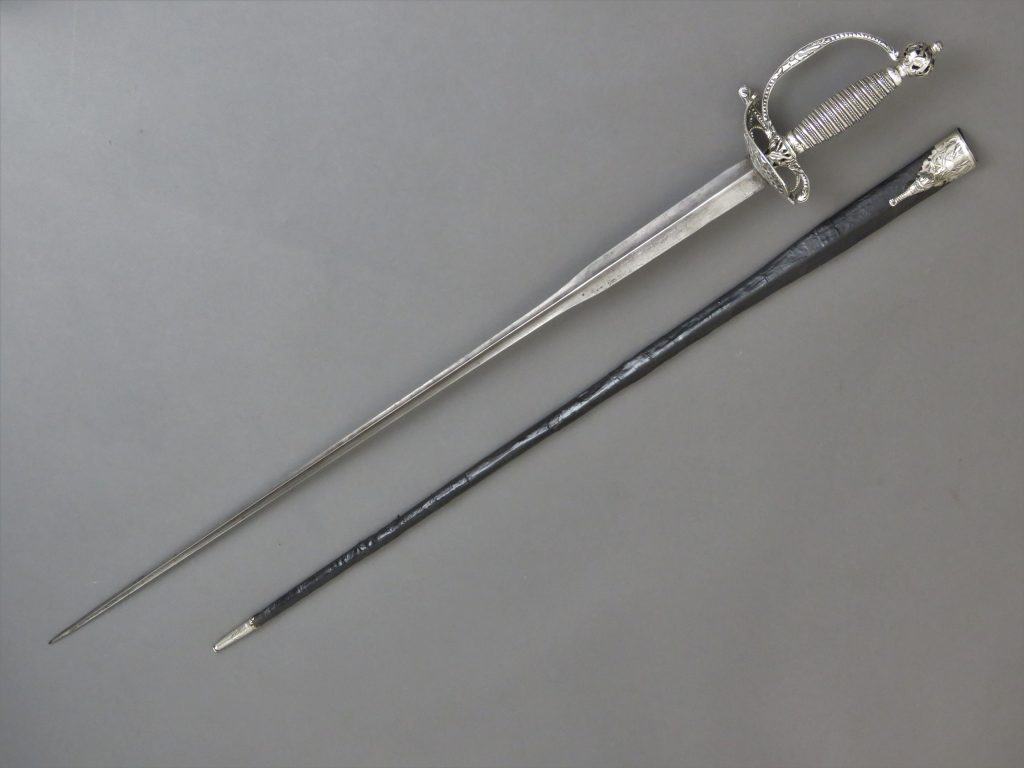 An exceptional English silver hilted small sword by John Carman (the second)  with London hallmarks for 1760/1. The hilt is of boat-shell type which is scarcer than the double shell and dish shaped guards which were the most common hilt forms in the 18th century. It is mounted with a colichemarde blade. The guard is sumptuously chiselled and engraved with musical themes of instruments and music sheets of remarkable clarity and condition enhanced with foliage and scrolls.

The sword may well have belonged to a successful musician or composer of the time. Small swords were often designed to represent the profession of the owner particularly if they were officers in the military or the navy. Whilst the stylish construction of English small swords meant that they were a fashionable addition to smart attire they were formidable duelling weapons which had evolved over two centuries from earlier rapiers.

The hilt consists of the boat-shell guard, pas d’ane rings, knucklebow, forward and rear quillons and an ovoid pommel. The shell guard has a ribbed and moulded border with a scallop-like enhancement towards the front. On both sides bird-like beasts have shapes of theatrical scrolls emanating from their mouths which frame wind, string and percussion musical instruments and music sheets. These themes, enhanced with scrolls, are repeated on the ricasso, knuckle bow and pommel.

The grip consists of alternate bands of flattened and roped silver wire of contrasting thickness mounted onto a wooden baluster shaped core with engraved silver cap terminals top and bottom.

The tapering, hollow ground, stiff, triangular section blade is of colichemarde form and etched with a panel of scrolls each side in the wider section towards the hilt. The blade is 31 inches (79 cm) long. Overall length of the sword is just under 38 inches (just over 96 cm).

The London hallmarks are present in a row on one side of the knuckle bow near the pommel, consisting of the crowned leopard’s head mark of the assay office, lion rampant, the date letter stamp and maker’s mark of a letter “I”, (the 18th century “J”) and a letter “C” separated by a dot. There were two makers in London with the name John Carman. The first died in 1741 and therefore could not have made this sword. His son, the second John Carman, died in 1764 at the age of 43, some three years after making this sword. His business premises were in Holborn in the City of London.

There are no losses, repairs or damages to the hilt which has maintained its original pleasing outline.  Overall the sword is a fine example of the London silver hilt makers’ work of the time.

The sword retains its original scabbard fabricated from a wooden core covered with black leather and lined with red velvet visible at the mouthpiece. The blade sits well inside it. The chape is engraved in similar style to the hilt. The mouthpiece is probably a replacement due to its inconsistent style of engraving which features military rather than musical themes with stands of arms. It is punched at the back with the name of “FEESEY Cutler to his Majesty Pall Mall”. Small sword scabbards were made intentionally thin in the interests of style and elegance. As a result they were fragile and easily damaged which is why so few survive. This scabbard has been extensively repaired with binding on the outside which is covered with black lacquer. It may have been trodden on to achieve its pre-repair condition.