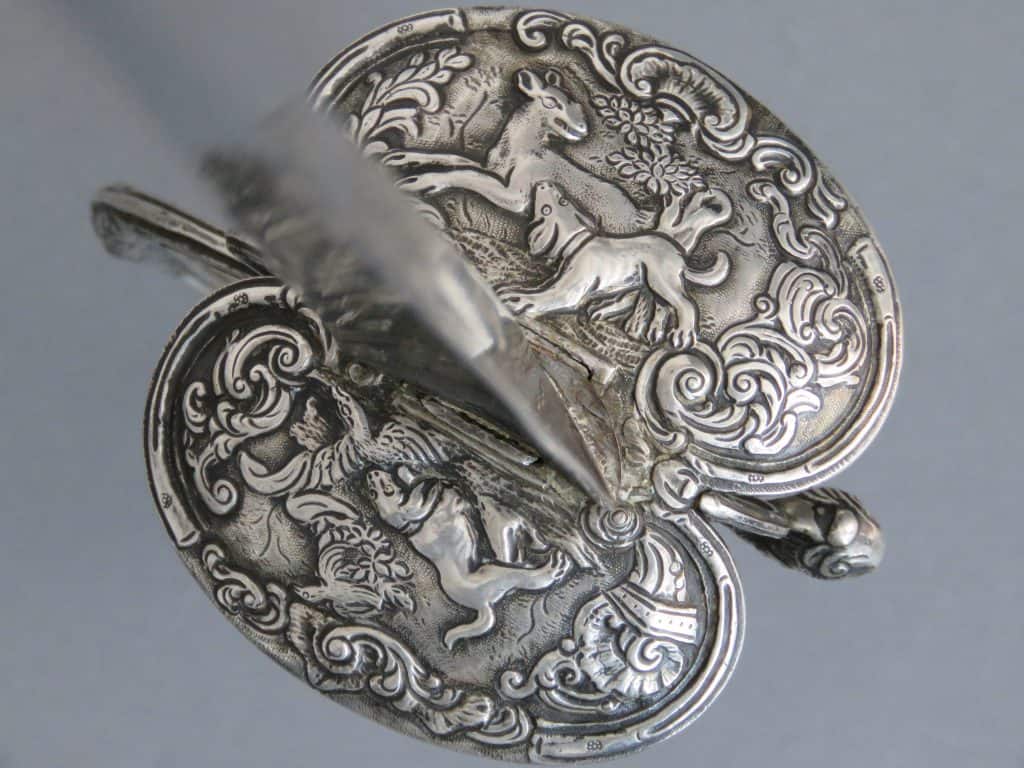 A very fine English silver hilted small sword with London hallmarks for 1764/5 probably by John Bennett (I). The hilt is sumptuously chiselled and engraved with hunting scenes and animals of remarkable clarity and high quality amongst foliage and scrolls. It would appear therefore that the sword belonged to a member of the landed gentry for whom hunting was a passionate pastime.

Despite the stylish construction of English small swords they were formidable duelling weapons. The hilt consists of a convex double shell guard, pas d’ane rings, knucklebow, rear quillon and an ovoid pommel. The convex underside of one shell guard depicts a dog bringing down a deer and the other a dog retrieving a large wounded bird, probably a goose. The upper concave side depicts two hunting dogs at rest inside one shell and the other shows a dog retrieving an injured bird,  same as the shell beneath, but facing in the opposite direction. These features inside the shell perimeters are surrounded by a moulded border enhanced with vegetation and scrolls. One side of the pommel depicts a dog attacking a wild boar and the other depicts two further dogs at rest.  The ricasso is chiselled with a lying dog on one side and a lion on the other.  The knuckle bow is enhanced with foliage and scrolls.

The tapering, hollow ground, stiff, triangular section blade is decorated with engraved panels of scrolls near the hilt which are now worn. An inscription on both sides reads “ne me firez irs sans Roi son” (won’t make me go without his king) the significance of which is now unknown. The blade is 31.5 inches (80 cm). Overall length of the sword is 38.25 inches (just over 97 cm).

The grip consists of alternate bands of flattened and roped silver wire of contrasting thickness mounted onto a wooden baluster shaped core with engraved silver cap terminals top and bottom. The sword retains its original scabbard fabricated from a wooden core covered with brown leather stitched along the side. The chape and middle mount with its suspension ring are engraved in similar style to the hilt. The mouthpiece is probably a replacement due to its inconsistent style of engraving which features a military rather than a hunting theme with stands of arms. It is punched with the name of “Bland of St James’s” at the back.

The London hallmarks are present in a row together on one side of the knuckle bow near the pommel, consisting of the crowned leopard’s head mark of the assay office, lion rampant, the date letter stamp and  maker’s mark. The maker’s mark is not well stamped on the curve of the bow but due to its similarity to other makers’ marks is probably that of John Bennett (I) who lived from 1708 until 1774. He was apprenticed to John Carman, another leading silver hilted sword maker in London for seven years in 1723 and was sworn free of the Cutlers’ Company by servitude in 1731. He based himself as a sword maker in New Street then Threadneedle Street in the City of London and rose to various positions in the Cutlers’ Company becoming Master of the Company for the year 1750-1751.

The scabbard is formed with a wooden core over which a brown leather  covering has been stitched. There are no losses or repairs to the hilt which has maintained its original pleasing outline.  It is rare to encounter swords of this type with original scabbards. Overall the sword is a fine example of the London silver hilt makers’ work of the time.