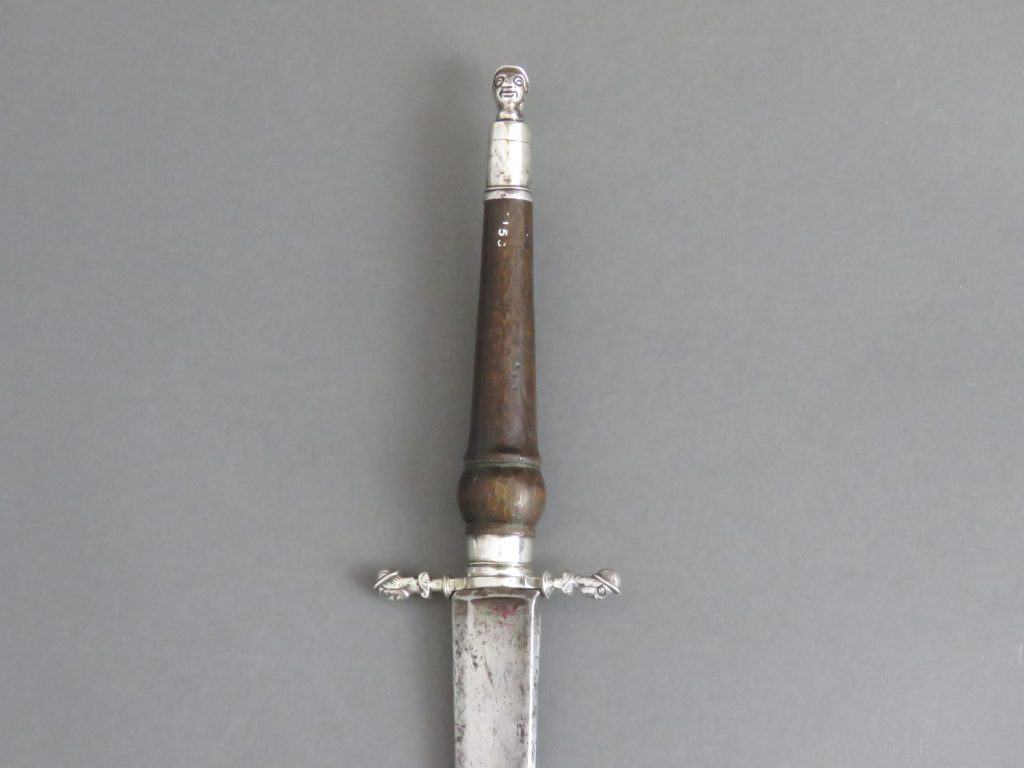 A fine example of a late 17th century English silver mounted plug bayonet. Plug bayonets came into use in the British military after the middle years of the 17th century and remained in use until they were replaced with the socket bayonet in the early 18th century.

The grip is formed from hardwood of circular section with a characteristic swelling at the base with a turned double-grooved collar above and below. Above this the grip  tapers towards the pommel. The cross guard has a thick circular block and is mounted with quillons which terminate in busts of helmeted warriors. Above the cross a ferrule with a moulded base is mounted between the cross and the wooden grip. The long tapering pommel cap is of similar form and mounted on top with a similar bust to those on the quillon  terminals but slightly larger.

The particular feature of helmeted heads forming pommel caps and / or quillon terminals was noted by Harold Peterson as an “English pattern that seems to have been very popular during the very late 17th century, and possibly the opening years of the next century” which “boasted pommels and quillon terminals in the form of helmeted heads”. A survey of plug bayonets by R.D.C Evans devotes a section to English plug bayonets and notes that those with helmeted heads are English and illustrates several bayonets of this type.

The slightly curved tapering blade has a short ricasso from which a broad fuller extends to the blade tip. The convex edge is sharpened from the ricasso to the tip whilst the back edge is sharpened for the last third of its length with the  edge shaped as a strong triangular ridge. The blade length is 14.25 inches (just over 36 cm) and overall the bayonet is just over 20 inches long (51 cm).

The bayonet is in fine condition with some minor mottled patches of age-related staining flecked in places on the blade.  The remnants of an old collection number are present in white on the grip near pommel and on the same side in red near the ricasso. The grip exhibits a rich dark patina.