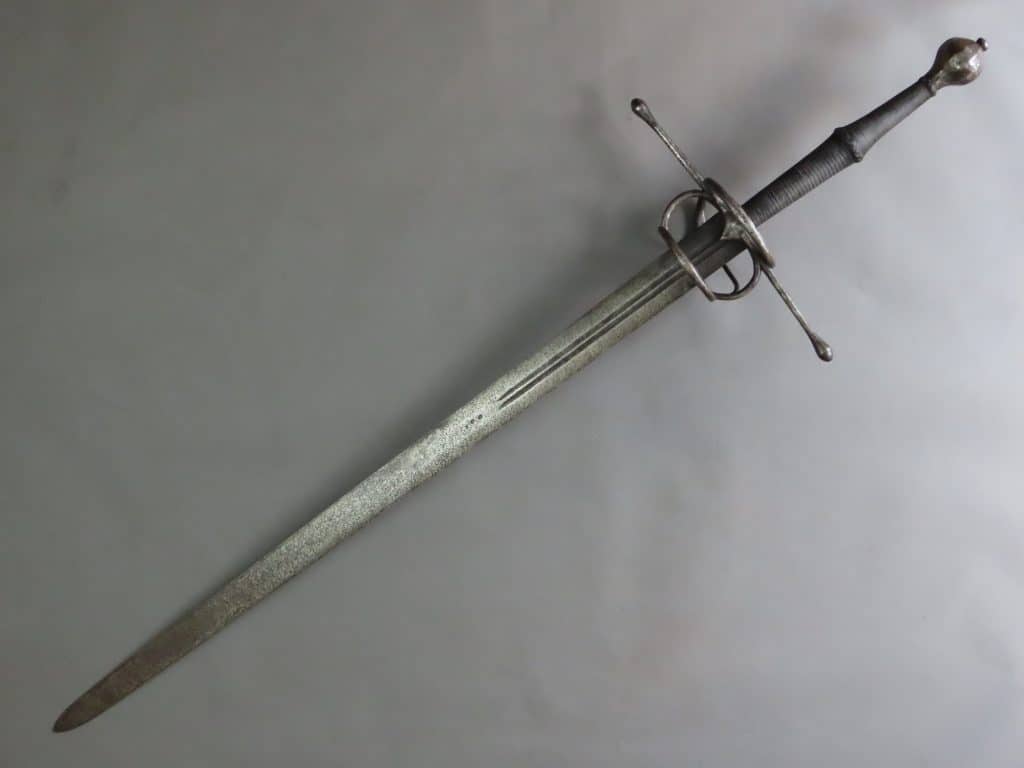 A scarce and attractive two handed sword of “hand and a half” type dating to the third quarter of the 16th century. This is a well made, elegant and finely contoured example, well balanced in hand and in original condition.

These large swords were generally made for two-handed use but were designed to be used equally well with one hand when required by a trained user. In the 16th century “hand and a half” swords were a common sight on European battlefields, carried by small numbers of specially trained foot soldiers engaged in the thick of hand to hand fighting as armies collided. Often the weapon of a mercenary, these men were almost permanently employed during a time of shifting religious, political and social change. Towards the beginning of the 17th century they went out of use and today are quite rare compared to the survival rates of two-handed swords which are of the flamboyant “bearing sword” variety – large, well made, imposing and decorous, designed mainly to be carried point up in civic procession rather than for use in combat.

The hilt consists of a robust quillon block from which the broad arms of the cross guard are forged in rounded section with swollen terminals.  A ring guard is forged from the block, and a smaller secondary ring guard sits beneath this attached to the base of two vertically aligned convex crescents of iron which extend from the underside of the block each side of the blade. This structure is further strengthened on the reverse side by an inner guard bar which emanates from the cross bar then trifurcates to join and add strength to the secondary ring guard.

The solid plummet shaped pommel is faceted with twelve sides with a short neck beneath and an integral button on top. The two-stage waisted stepped wooden grip is bound with plaited wire with “Turk’s Heads” mounted at the top, bottom and around the swollen middle.

The broad double edged blade is of lenticular section and of exceptional quality with a finely ground taper. Two fullers extend from the hilt on each side in parallel for 12 inches (30.5 cm). Just beyond the fuller terminals an armourer’s or blade maker’s mark is applied three times on each side in the form of a small stamped armorial shield. The blade is most likely of German  origin from one of the main arms manufacturing centres such as Solingen or Passau.

The sword was part of the collection of David Jeffcoat who was Head of Arms and Armour Sales at Sotheby’s in London. During the 1970s David was responsible for positioning Sotheby’s as the leading auction house for arms and armour sales, most notably winning and fulfilling the contract to sell the Renwick Collection in 1972.  David passed away in 2020 and his collection was sold by his estate in 2021.